God is something often left undefined or poorly defined. Who is God? The Christian idea of God resulted when a whole load of mythology from the Egyptians, the Greeks and Romans, the Jews and many others got mixed together. [1] Jesus is God's son, no he isn't, he's God, unseparated from the Father. Are you confused? See Trinity to try and sort it out.

How Christians describe their god

If that were true, then the Bible would contain wonderful scientific information, excellent moral teachings, superb everything. In fact the Old Testament contains mythology from the Bronze Age; later there's Iron Age mythology; and after that in the New Testament there's Roman Mythology. The Bible is clearly the work of human beings who knew no more than other people living at their times in history. [2]

Christians are sure that their god must be real because he did wonderful miracles. He did stuff like causing a burning bush that Moses saw; Jesus healed the sick, turned water into wine, and did other spectacular stuff that only a god could do.

Some abrahamists claim that their god's moral laws surpass human laws in supreme perfection, yet their god is comfortable with slavery, and with marking and disfiguring slaves, and with children being born into slavery, and separating slave families, and their god insists on circumcising boy and man slaves. [4] See Christian morality for more about ethical godliness.

Christians think that their god created the universe. Why does there have to be a creator? The christian god doesn't need a creator, but somehow or other the universe really needs a creator. 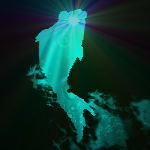